The most beautiful - and most symbolic - part of the Università Cattolica Milan campus are the cloisters. Not only were they designed by Bramante, and not only do they frame the lecture rooms and fit perfectly into the area of the city richest in late-Roman vestiges, perhaps most importantly they are brought alive by those making everyday use of them. The image of the columns joined by arches creates a lasting first impression and remains in the heart of every student - a photograph in your mind as you first enter the university. It is that area of the university that then becomes a theatre setting as students wait to take exams, a place to meet to exchange notes and ideas and a hug, and of course it then turns into an athletics track as new graduates race over the low hedges on graduation day. The two paths that outline the four quadrants are the perfect symbol of a crossroads of people, languages and cultures which have animated the first hundred years of Cattolica’s history. It is incredible to think that the first international students welcomed to the university saw the very same columns and experienced the very same spaces as the class of 2021 is seeing for the first time today. 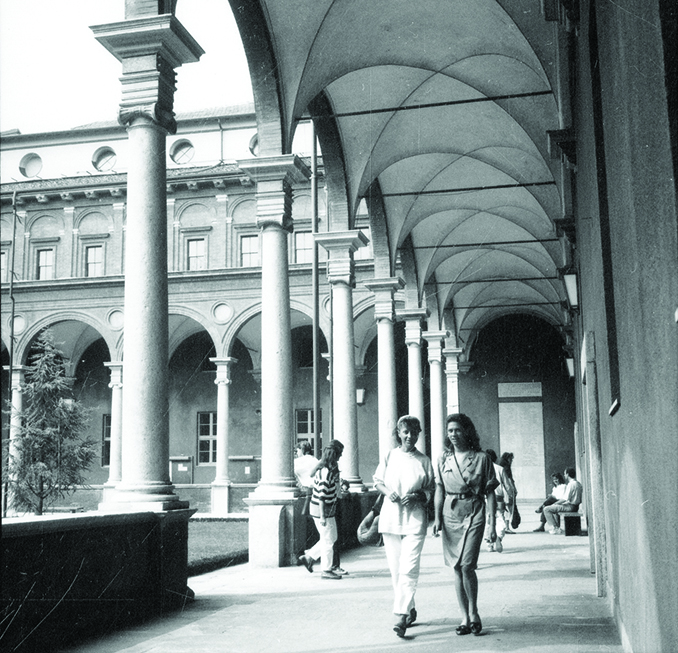 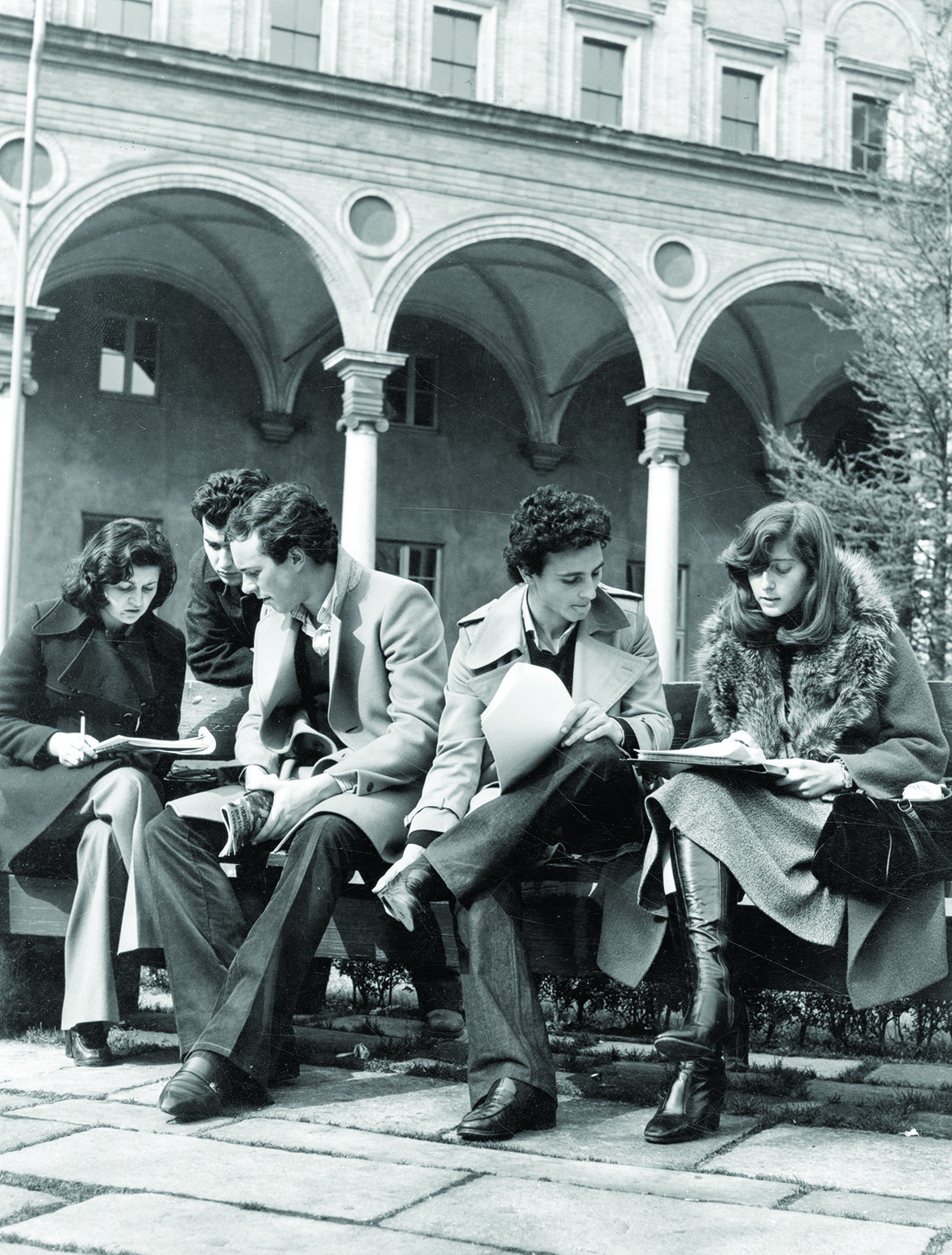 It was in fact 1924, only three years after the foundation of Università Cattolica, when Father Agostino Gemelli first realised how important internationalisation was. There was no time to waste: the war had turned souls inside out although it had awakened people to the fact that the world was a very big place, there was an urgent need to turn it into a beautiful place. Within this context, the International Federation of Catholic Universities (FIUC) came about, the first international network with Università Cattolica and Katholieke Universiteit Nijmegen as original members, who were joined by another 14 universities a year later. It wasn’t until 1977 that the initial official reports of the international exchanges were made available: the University of Louvain-La-Neuve was the first university that Cattolica signed a mobility agreement with and this was directed mainly towards scholars of medieval history.

It was already clear at the time that exchange of students and academic staff was not only a way to allow for a strengthening of individual academic pathways but was also a way to make the collective environment of the university international: internationalisation is so called because it is a circle of human ties and relationships created to last over time, often separated by distance but even more often animated by the desire to find new ways to learn, to work together and to draw closer. In this spirit Cattolica joined the Erasmus programme in 1988, starting with the exchange of a small number of students just a year after the official opening of the programme across Europe. It certainly could not have been imagined that over time this would have led to a cohort of approximately 4,800 incoming international students covering 168 nationalities and 2,800 outgoing domestic students, numbers that continue to grow year on year.

Joining the Erasmus programme was just the beginning of a series of initiatives aimed at building internationalisation within and outside the university. Just to give two examples: in the 2002-03 academic year the first double degree programme in International Management was launched by the Faculty of Economics and Law at Piacenza with the College of Business Administration of Northeastern University in Boston and the Management School of Lancaster University in the United Kingdom, while in 2004 Cattolica joined the ISEP network, a global community of more than 300 universities in 50 countries and has since become a major partner. Since its inception, ISEP has led to more than 60,000 students taking part in summer, semester and annual programmes. 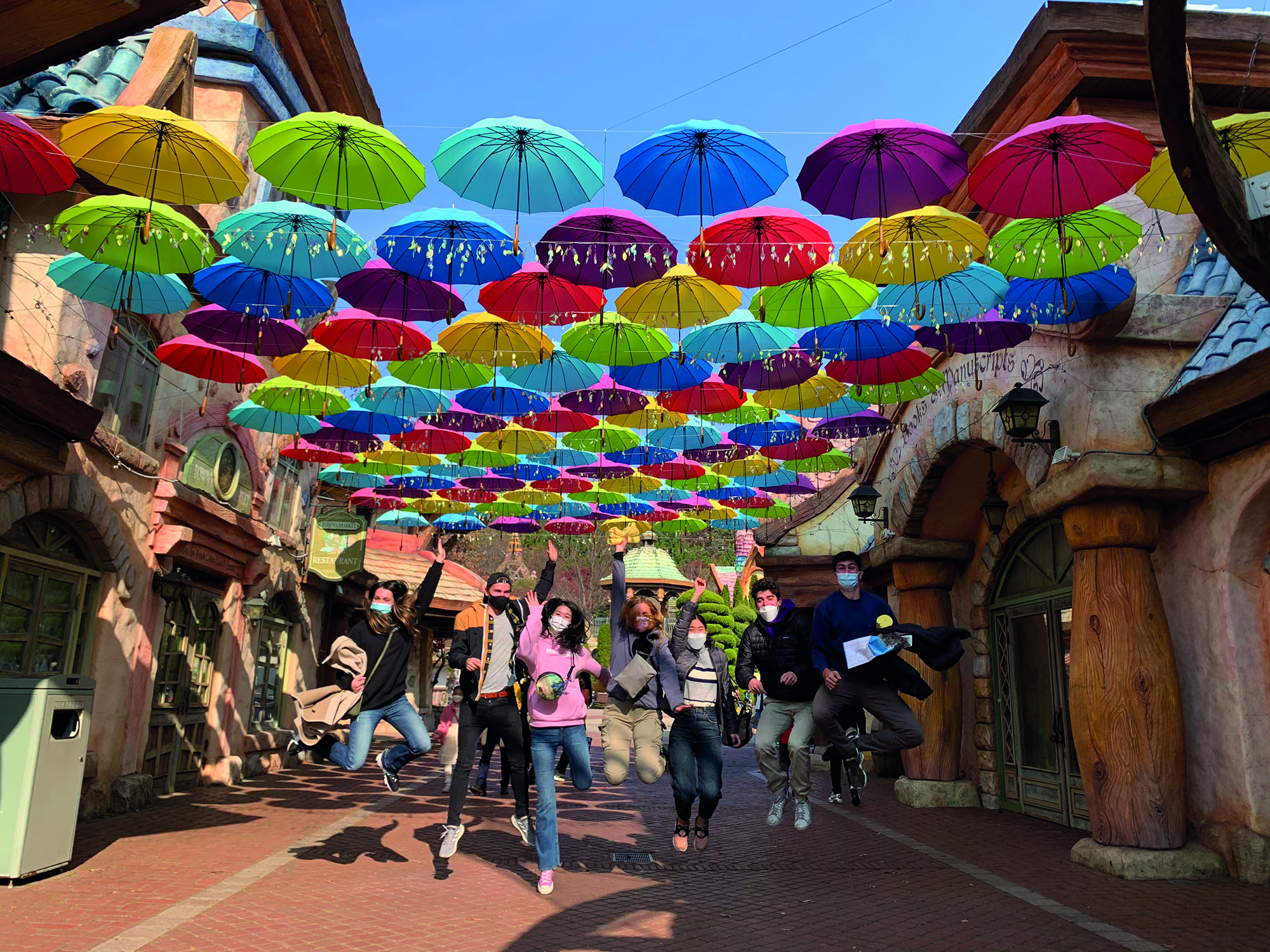 All this was the result of a fruitful combination of various elements: apart from the people who built and still make up both the management of the university and the Cattolica International, a great contribution to be remembered is that of the late Tony Adams. In addition to serving as Vice Chair of ISEP, Tony Adams was head of the Business Computing department at the Royal Melbourne Institute of Technology before taking over as Dean of Business and later Director of International Programmes. From 2004 to 2007 he was Pro Vice Chancellor International at Macquarie University and then he and his wife founded Tony Adams and Associates, a consulting firm for the internationalisation of universities. His death in 2011 left a great void in the international community of higher education experts. For Cattolica, apart from being a special consultant, Tony Adams was central to a fundamental turning point for the structure and future development of the area. It was due to him that the International Curriculum was set up in 2008 and this allowed the university to compete internationally via exchanges and partnerships with foreign universities, initially mainly in North America. The International Curriculum has always been managed directly by Cattolica International. In 2008 there were eight courses in economics and business management, while now six different areas are covered ranging from Fashion & Design to Sociology, from International Relations to Media and Communication.

Establishing the International Curriculum was a driving force towards on the one hand the creation of a wide international network of agents who began dealing with new markets such as northern and eastern Europe, Asia and Australia, and on the other, the launching of the first degree courses taught entirely in English. This also made it possible to strengthen ties over time with other Catholic universities around the world, starting from Father Gemelli’s initial idea through to the formation of the Strategic Alliance of Catholic Research Universities (SACRU).

Behind this move towards expanding and refining an educational offer directed towards meeting the needs and tastes of an increasingly young market in a world which changes each academic year was a systemic concept of the world of higher education. The whole is greater than the sum of its parts, and an improved training offer has always been keenly sought after along with a higher level of services and processes. These have included orientation, assistance with visa procedures, support for daily life and support in finding accommodation, which over time have become integral to the work of the International Development Area. Technological tools for managing students have also changed. The pandemic last year brought with it the need to make much greater use of the internet and this has now led to student entry processes happening entirely online, from first interest right up to enrolment.

The difficulties experienced over the last two years have certainly put a lot to the test, regarding not only the economic sector but also the very concept of internationalisation, since it involved so many aspects, such as travelling, cultural shock, linguistic difficulties, staying at home, the feeling of disorientation, and the desire to get moving again. Transferring what is usually done in person to an online setting has its limits but it has been surprising to see just how adaptable we are. Together with technological potential, this has meant that people have been able to collaborate successfully, even when they are situated far from each other and have never met in person. Redesigning the student journey has not been easy, but possibilities have opened up for many more people than those who usually access a university course abroad.

In the meantime, the university community is gradually starting to be seen around the cloisters again in Milan. New students are ready to build wonderful personal memories of their university years here and we look forward to accompanying them in this.

The Strategic Alliance of Catholic Research Universities (SACRU) is composed of Catholic universities with a strong orientation towards research and excellence in education. The board of directors is made up of the President, Prof. Josep Maria Garrell (Rector of the Universitat Ramon Llull), the Vice President, Prof. Ignacio Sánchez Díaz (Rector of the Pontificia Universidad Católica de Chile) and the rectors of the other five universities in the network: the Australian Catholic University (Australia), Boston College (USA), Pontifícia Universidade Católica do Rio de Janeiro (Brazil), Sophia University (Japan), and Universidade Católica Portuguesa (Portugal). The general secretary is Prof. Pier Sandro Cocconcelli (Vice Rector's for Internationalisation, Università Cattolica del Sacro Cuore). The founding universities of SACRU make up the initial nucleus of the alliance and other Catholic universities are expected to join in the coming years.

Cattolica's international commitment has not been limited to student education. Much has been carried out in international cooperation and this will continue in the future. The foundation of the university’s Centre for International Solidarity (CESI) in 2006 was the initial step towards a wide range of projects that have involved many different actors focusing on a single purpose: to help countries that need it most to develop their educational systems, both structurally and as regards their educational offer. Perhaps more than any other area, international cooperation puts the university on the map and means that it is putting its knowledge at the service of others in the world, aware that it can have a lasting impact over time.

A very important element of internationalisation at Università Cattolica is the Confucius Institute, the first Confucius Institute in Lombardy, having been founded at the university in 2009. It was the result of a partnership between Università Cattolica, the Beijing Language and Culture University (BLCU) and Hanban, the Chinese Ministry of Education’s Office for the promotion of Chinese language and culture abroad. BLCU, based in Beijing, has been hosting international students for many years. Apart from its long tradition of teaching Chinese to foreigners and cultivating collaboration with universities in other countries, the university also trains Chinese diplomats. As a result of the relations created with China through the Confucius Institute, Università Cattolica has developed a broad range of activities connected to doctorate programmes, double degree programmes and collaborations with many faculties, including Political Sciences, Law, and Banking and Financial Sciences. All this, together with student exchange programmes, is a testament to the constant commitment of the Confucius Institute in establishing university relationships based on knowledge and research which over time have led to strengthening the reputation of Università Cattolica in China.

Article featured on Worldbound, edition n.7-2022.
Subscribe to our newsletter