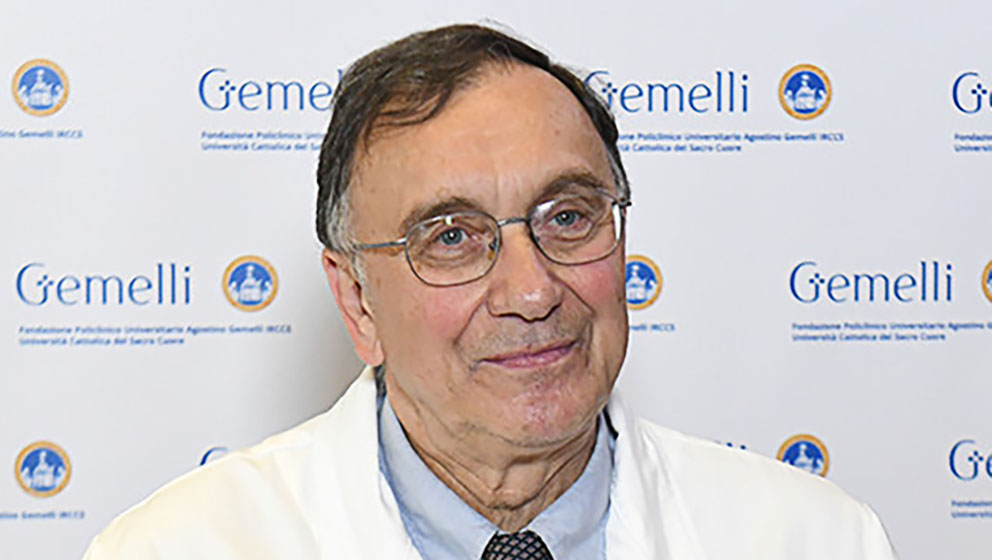 In pandemic situations like the one we are experiencing, what is the role of the infectious disease specialist?

Il Sole 24 Ore newspaper reported on 20 March that an agreement was signed by the Fondazione Policlinico Universitario Gemelli and the US Charitable Trust. What collaborations like this is the Gemelli Hospital carrying out? Is there one in particular that has impressed you?

The agreement with the US Charitable Trust is an example of collaboration between institutions, but it isn’t the only
one. The swift move towards supporting society has seen actions by ENI, by the Messaggero (which launched a fundraising action for the Policlinico Gemelli as well as for Spallanzani Hospital in Rome), and by a number of Rotary clubs. Private citizens have also contacted me personally to offer their help. The list is so long. My late friend, Ronald Kennedy, with whom I worked in the United States in particular during the HIV epidemic, said to me back in the 90s: “Roberto - epidemics bring out the very best and the very worst in people”, and this can be applied to both individuals and communities. I must say that at this moment the dedication of our doctors, nurses and health workers, and the dedication of the media are commendable. I would like to say something about the journalists who I interact with on a daily basis. The work they do to communicate, inform people, and publish updates is certainly praiseworthy, and is just as important as all the charitable initiatives I referred to previously. There is also another initiative that is not based on economics, economics understood as a branch of ethics,
which is the great solidarity among researchers. The fact that the internet, the infosphere, has given a total response to a total disease such as the pandemic, tells us that we are a truly closed community, not in the sense of being closed in on itself, but in the sense that we are community in which everyone knows each other and where a Chinese researcher work could be used here right away. And it is in this sense that the internet plays an important role. I have experienced eight epidemics in my life, including that of Ebola in Africa, but I believe that this will be the first one to have been “helped”, as it were, by the web.

With the outbreak of the pandemic, the media actually abandoned the less important news and returned to what
is essential, to the social function of the news...

So, the epidemic - the pandemic - suddenly forced everyone to confront a health problem that emerged in Italy and I talk about this with the greatest respect for the more than 26,000 people who died in a short time, comparable to wartime: they have left broken lives and affections behind them, people who would never have in their wildest dreams thought that they would be experiencing such a situation.

I recently wrote an article on infectious diseases and cinema - how infectious diseases have been conveyed through film. The plague, HIV and Ebola are also frightening in films.
When we talk about infectious diseases we are referring to something invisible that comes to strike us, not the enemy with a bayonet or bombardment from the sky. It is an enemy that we can’t see. And this means that the “enemy” could even be our best friend who transmits the infection to us. It is a significant eventuality. And the other unavoidable aspect is that precisely because of the type of disease it is – another example would be the plague of which there was the Manzonian plague – patients do not receive the comfort that they need, as testified to by many of the doctors and nurses in Brescia and Bergamo for example. They recount that patients are dying alone, with almost no comfort from their religion. That is something to reflect on. The other fundamental thing is that cremation is used not by choice but by necessity. COVID-19, all in all, however, is a striking parallel to the plague and images like the Pope giving his blessing in a deserted Piazza San Pietro become etched into history.

What is the international scientific community learning from this pandemic, or rather, what precautions and actions
will have to be taken in the future to prevent these scenarios from repeating themselves?

I quote from an article by Corbellini, a well-known medical historian. At the beginning of the epidemic, before it had
become a pandemic and was still limited to China, in the Sunday edition of Il Sole 24 Ore he wrote a review of a
book on epidemics. The first sentence he wrote (and I hope I recall this well and don’t mispresent his idea) was this: “Epidemics are an inevitable evil in the history of humanity”. Let me explain. Epidemics cannot be reset to zero and although technology can help us a lot it cannot solve or prevent the spread of a virus or other agent. Types of virus spreading like this will happen periodically over time and most will be the result of anthropozoonoses, i.e. diseases that pass from animals to humans, as was the case with the Coronavirus.
Today it is the Coronavirus and yesterday it could have been Ebola, a flu linked to pigs and chickens, therefore a
whole series of diseases. This can be because where there is a close mix between humans and animals, such as the market in Wuhan or the African forest which is encroached on by humans thus reducing the habitat for wild animals, there is more frequent opportunity for humans, wild animals and domesticated animals to come into close contact. So, the first point to keep in mind is to preserve and improve ‘One Health’, for both animals and humans.

What have you learned from this pandemic?

First of all, that the system is vulnerable, and there is a need to plan internationally for pandemics. Nobody saves themselves by themselves. This disease affects everyone in, if I may say, a very democratic way. I think the other important thing is the role that science has to play. Perhaps science has already learned this lesson since scientists are already pretty cohesive. For example, on 9 January, a few days after China announced there was a problem, researchers had already sent sequences of this new virus around the world (80% similar to SARS - 20% different). These sequences allowed, for example, a basic swab test to be made. So, the news we produce here today goes to China, from China to the United States - the world is global. The other thing that we should learn, at a national level, is that you cannot create healthcare centered on hospitals, i.e. focused only on large hospitals of excellence. They must be linked to medicine in the community. Family doctors are extraordinary people who have paid a very high price in terms of the sickness and the deaths and they deserve the greatest of respect and it is
certainly not their job to organize the management aspects. Perhaps when everything is over, those in government positions of responsibility will think of creating different relationships with the young people coming out of university. In my opinion, patients shouldn’t be tied to a single doctor – rather, local doctors should create networks. Regardless of the controversies, I believe that health care should be rethought not so much in the construction of new hospitals and more beds, but by aiming towards a stronger care-oriented vocation in the area by leveraging these extraordinary players - the general practitioners.

In these last few weeks, which have certainly been intense, has there been an episode that particularly affected you?

There have been many episodes. The thing that struck me most, because it reminded me of images that I had only read about in books and never thought I would ever experience, was the long line of trucks leaving the cemetery in Bergamo with that cargo of humanity and all the sadness that they had left behind. This was an incredibly powerful image which is very difficult to forget.

Another extraordinary thing is the dedication that we are seeing in our hospitals. The effort you see drawn, painted, on the people who are working – effort which is of service and shows solidarity with others, and which is not only physical but psychological too.

And then the enthusiasm of the young people. This is something I have witnessed. We sent them to the frontline. We sent the third- and fourth-year specializing students, the ones we kept “protected” until yesterday. They found themselves at the forefront and responded with great maturity and responsibility.

What differences are there between the COVID-19 pandemic and pandemics in the past?

One of the differences is the speed with which it grew as a result of the world being globalized. To find a similar
pandemic we have to go back to one which I have a very faded memory of because I was just four or five years old at the time. It was the Asian pandemic of 1956-1957: we are talking about a virus that was transmitted like this, by way of droplets, more or less like the flu, with a diffusion then very widespread. And there are remarkable differences. One is that the Asian flu began in China (almost all epidemics begin in Asia) and arrived in Europe 18 months later, while COVID-19 arrived in Europe immediately, by air. It got there very quickly because it was linked to today’s means of transport. Another difference is that the Asian flu grew with no attempts to stop it i.e. people got sick, went back to work and then got sick again. The COVID-19 pandemic for the first time has seen - on a worldwide level - that posts have been positioned, that is, the virus is being directed towards its elimination. The more we know about the world of viruses and germs, the more we find ways to contain them, which in our case is the use of the lockdown, while in other cases there may be other ways. This indicates how science has made significant progress towards understanding how pandemics can be combatted at the same time as using co-responsibility on the part of populations

Professor Cauda holds a Medicine & Surgery degree from the University of Genoa.

During his career he undertook research projects at a variety of institutions, such as the University of Alabama at Birmingham, Southwest Foundation for Biomedical Research San Antonio, NIAID/NIH Bethesda, Trnava University, Postgraduate Medical School Bratislava.